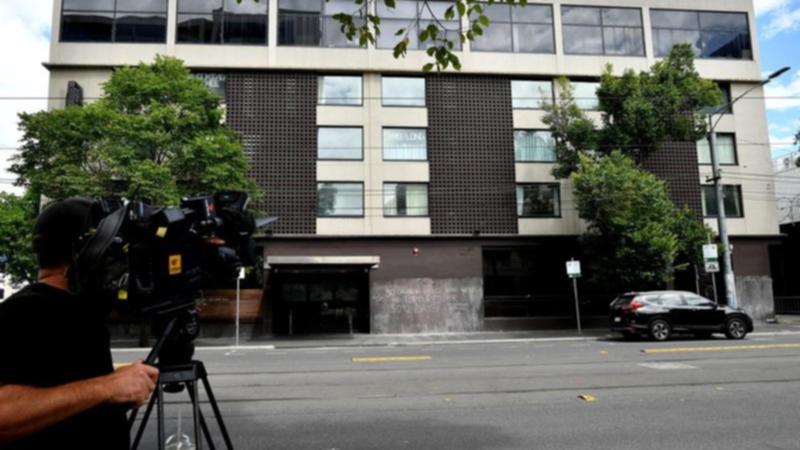 Denied a visa to enter Australia and awaiting possible deportation, tennis superstar Novak Djokovic has been moved to an infamous Melbourne hotel.

TV footage showed the world number 1 arriving at the Park Hotel in Carlton on Thursday morning after his visa was refused for insufficient evidence, ahead of the Australian Open.

In the afternoon, supporters draped in Serbian flags danced outside the Swanston St Hotel under the watchful eye of a large media congregation.

The hotel has a checkered history.

For more than a year, the facility housed inmates airlifted to Australia from Manus Island and Nauru for emergency medical treatment under old medical evacuation laws.

The inmates were previously held at the Mantra Hotel in Preston.

More than 50 people were released on transitional visas in January last year, but more than a dozen have remained behind.

There was an outbreak of COVID-19 at the hotel in October, with at least 22 of 46 refugees and asylum seekers testing positive.

Two weeks ago, two fires broke out on the third and fourth floors. One person was taken to hospital for inhaling smoke and police say a member of staff was assaulted.

Refugee advocates estimate that around 32 men are being held there.

Protesters scaled the front of the hotel around 2 p.m. Thursday, holding up banners and placards calling for the release of the refugees.

“These people have been detained by Australia as maritime arrivals for seeking asylum,” lawyer Jane Salmon said in a statement.

“They have been detained for nine years. Perhaps the empathy of a man of the profile of Novak will help them achieve freedom.

Before being turned into a makeshift detention center, the Park Hotel was used as a quarantine hotel in 2020.

Ninety percent of Victoria’s second wave cases – which resulted in 18,000 infections, 800 deaths and a lockdown that lasted 112 days – were linked to an outbreak at the hotel, the investigation said. the state on the quarantine of hotels.

He was then known as the Rydges on Swanston but has since been renamed.