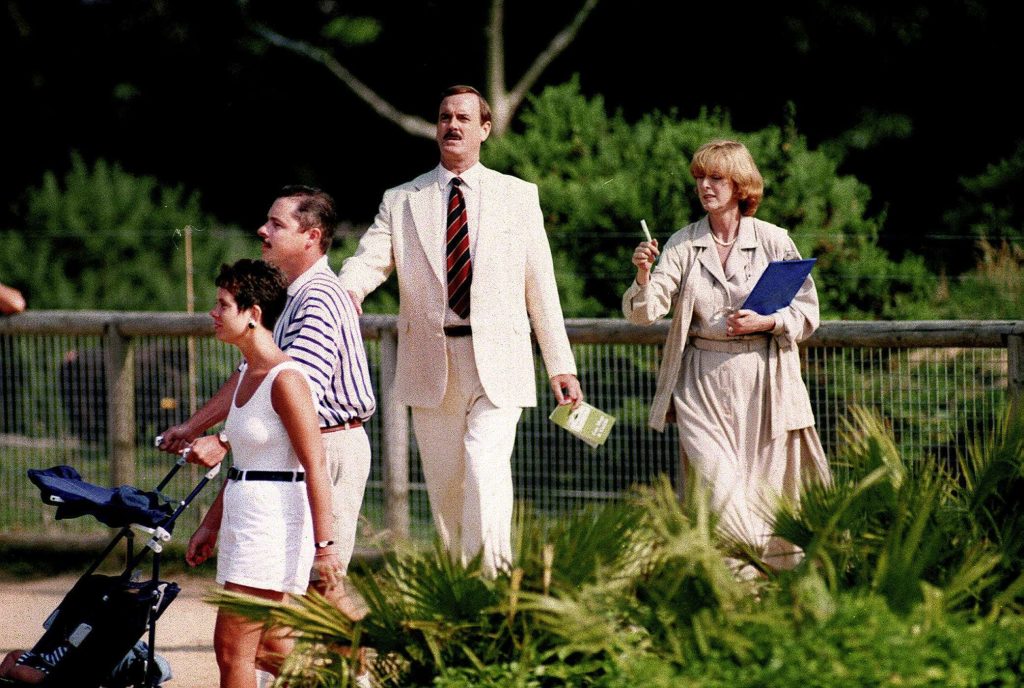 IF two producers are successful, a film based on one of Victor Hugo’s novels could be shot in Jersey.

David Shanks and Joy Mellins are trying to secure financial support from the Jersey government and private investors to help produce Sea Workers, which is based on Sea Workers – a tale about a shipwreck in Guernsey. FULL STORY HERE

We all know that Bergerac was filmed on the island at the time. But here are six other movies or TV shows that were filmed in Jersey. (And one that didn’t quite reach the screen)

John Cleese wrote and starred in Fierce Creatures, the story of a new manager attempting to restore the fortunes of a failing zoo by eradicating all but the fierce animals. Scenes were filmed at Jersey Zoo in 1995.

Extras are pictured here taking a break during the filming of scenes from Force 10 of Navarone in the grounds of La Hague mansion in the St. Peter’s Valley in January 1978. This Anglo-American war film was sequel to the 1961 film The Guns of Navarone and tells the story of two British commandos and members of an American sabotage unit attempting to eliminate a German spy who has infiltrated a group of Yugoslav partisans. The film also starred Richard Kiel (who played Jaws in The Spy Who Loved Me and Moonraker) and Carl Weathers (Apollo Creed in Rocky). They are pictured here at the Hotel de France.

Bruce Greenwood and Annette Bening starred in Being Julia (2004), a comedy-drama set in the 1930s, part of which was filmed in Jersey. The film includes scenes shot in Bouley Bay and La Rocque.

4. Enemy at the Gate

The ITV series Enemy At The Door (1978-1980) followed life in Guernsey under German occupation. However, the series was shot more often in Jersey, including this scene on the north coast.

Fierce Creatures wasn’t the only film to shoot scenes at the zoo. Comedian Graham Fellows (aka John Shuttleworth) filmed part of his whimsical Southern Softies parody in the Channel Islands in 2007. He is seen here talking to caretaker Richard Johnstone-Scott.

The Goodies – Bill Oddie, Graeme Garden and Tim Brooke-Taylor – are pictured filming on location at St Catherine’s Breakwater on October 24, 1972 for their new television series. In the illustrated sketch, The Goodies (on the raft) go in search of treasure but are shipwrecked and stranded on a desert island where they meet beautiful native girls – played by the pool attendants at Fort Regent Margaret Lee, Pat Hingston and Angela Johnson. Jersey was chosen, said production assistant George Clarke, because of the warm weather and suitable locations. The Goodies created and performed their eponymous comedy from 1970 to 1982.

Ten years ago, a little-known movie producer called Keith Cavele has secured a £200,000 government investment for his film, Knights of Impossingworth. It was, he said, a “fantastic film” and he claimed to have a top celebrity waiting for him backstage – if only enough money could be raised to start filming. There was an outcry over the huge sum paid to Mr. Cavele’s company, Canbedone Productions, and there was likely the obligatory “lessons will be learned” report in the saga. We came away from this whole sorry episode knowing only one thing for certain – it was, quite literally, a “fantasy movie”.